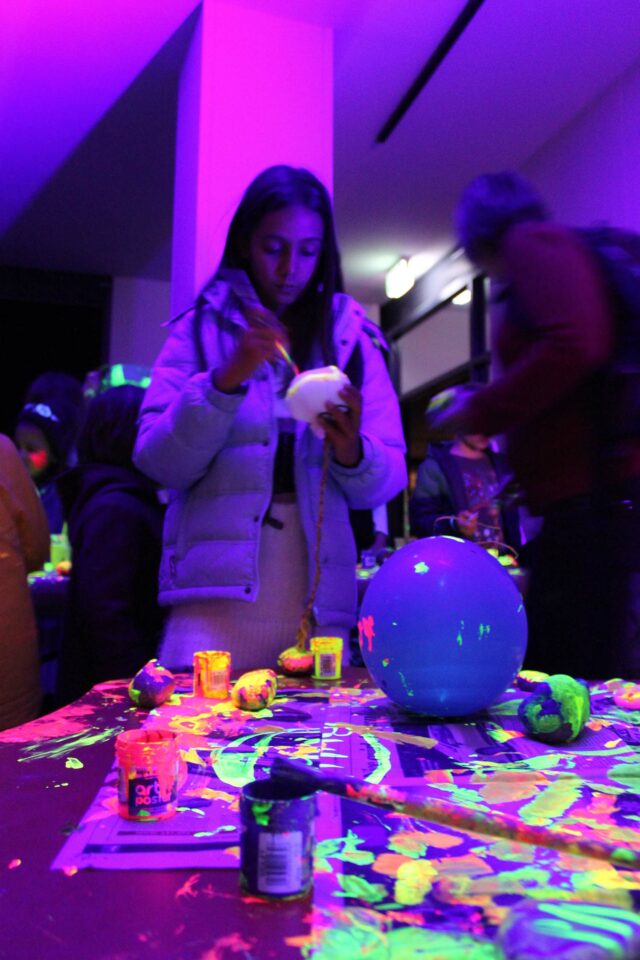 There are lasers painting a multi-coloured constellation on the atrium ceiling. Bathed in red and purple light, I get into the swing of things, offering up my arm to be drawn on in invisible ink. The crowds press into the foyer as outside the stars disappear.

Soon the rain is coming in horizontally, but everyone’s safe indoors, exploring the darkened museum, ultraviolet torches in hand. Into Te Rangi Whenua the children flow, in search of the secrets hidden here and there. Before long they’re camped out in Manawatu Journeys, examining the evidence around the caravan table, illuminated only in eerie blue.

Outside Te Awa it’s almost bright as day, as the paint flows like a river and fluoresces in a fantastic display of yellow, pink and green. As much ends up on faces as it does on the rocks – having Mum and Dad painted up too becomes de rigeur. Some people show more paint than skin, looming out of the dark like the ghosts of Manawatu past.

Sarah the Scientist, goo-maker extraordinaire, off in a side room, has people around her table three deep. I listen to one girl, about eight years old, hearing from her dad about this demonstration and wide-eyedly declaring “I love science!”, before tearing off goo-ward without further comment. As the song goes: the kids are alright.

“It looks like snot!” declares one child as Sarah kneads and smooshes the glowing dough.

“If your snot glows in the dark, you should see a doctor,” she advises.

“It doesn’t, I can show you!” the child replies but for some reason the group demurs. “We believe you!”

The rain has cleared by the time the fog clears and the lights come back on. There are tears as some express their displeasure at having to leave the building’s short-wavelength wonderland. We all bear the marks of the night, whether they’re beautifully painted cheek-flowers or, in my case, the word “banana” scribbled on my forehead.

I am assured it washes off.

See more photos of the Nightlight event on our Facebook page.

next
Tunes from the Trenches