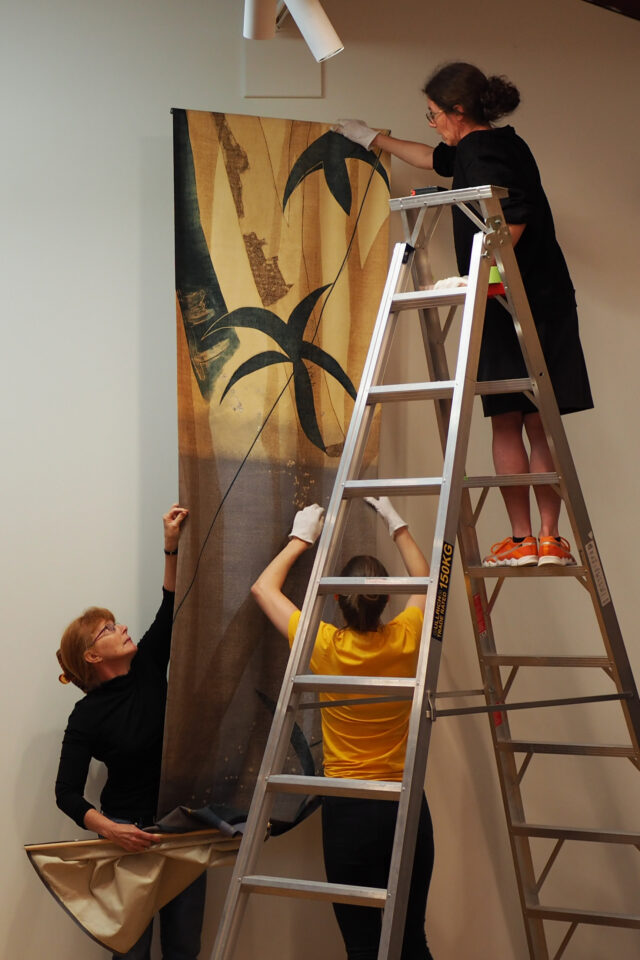 Her recent work Long Hee Lee is 3 metres high and now stretches along sixteen metres of the gallery wall at Te Manawa, part of her new print-based exhibition “A Songless Land”. Its golden colour references the precious metal sought by Chinese miners at its Southland location. With its sheer size and depiction of regenerating kāmahi forest, it aims to make visitors feel enclosed, overpowered and dwarfed by the forest experience.

The artist also wants them to feel regret. Before humans arrived, the islands of Aotearoa New Zealand were 85% covered by indigenous forest, a forest unique in the world due to millions of years of evolutionary isolation from the rest of the world’s land masses. It is said that the sound of birdsong in the forest was so loud that the children of European settlers were unable to hear their teachers in their classrooms.

Today, native forest coverage is at just 15%, and that figure is dropping still. The title of the exhibition suggests what that has meant for the birds, and for New Zealanders.

But Sue Cooke wants there to be hope too. Though “A Songless Land” highlights the ease and speed with which mankind can annihilate mature stands of trees, hundreds of years old, it also reminds visitors of the forest’s beauty and ability to regenerate itself.

“A Songless Land” remembers the forests of the past, highlights the dangers of the present, and invites contemplation of a future rich in native trees.