The small village of Āpiti is already baking in the early sun. Only occasionally does a bit of a breeze come down the valley to bring relief. Everyone’s going to be melting today – everyone but the cicadas.

The studio at Eric Brew’s place is just starting to feel the heat. Morning is clearly the best time to be here. The artist rummages through old sketches, sorting out what he wants to appear in his upcoming Te Manawa exhibition “Eric Brew: I Am Of This”.

Eric draws attention to an old sketch made on the shores of Lake Wairarapa. It’s a jangle of scribbled lines but somehow more communicative and expressive than the sketches with greater detail.

“It’s just bang bang bang,” says Eric, describing why he likes it more than the others. “It’s a real hit.”

These sketches will form a supplementary display to the main exhibition. So much choice, so little space!

Paintings lie thick in the studio, leaning against each other in layers. Works from the ‘70s mingle with ones from last week. There are at least two on the go in different corners.

It’s clear from this collection that Eric hasn’t planted his standard in any particular school or style. Still lifes with the universal bowl of fruit rub shoulders with landscapes, portraits and surrealism. Here, bold outlines suggest Matisse; there, the way a face shatters into emotional confusion suggests the cubist stylings of Braque, or even the unsettling portraiture of Francis Bacon. Eric calls it “fractionated realism”.

He he picks a painting out of the jumble. “This one, I’m thinking Cezanne, those sort of guys. I think back to history and they’re the people I’ve got over my shoulder, the Rembrandts and the other ones going ‘get on with it, boy!’” 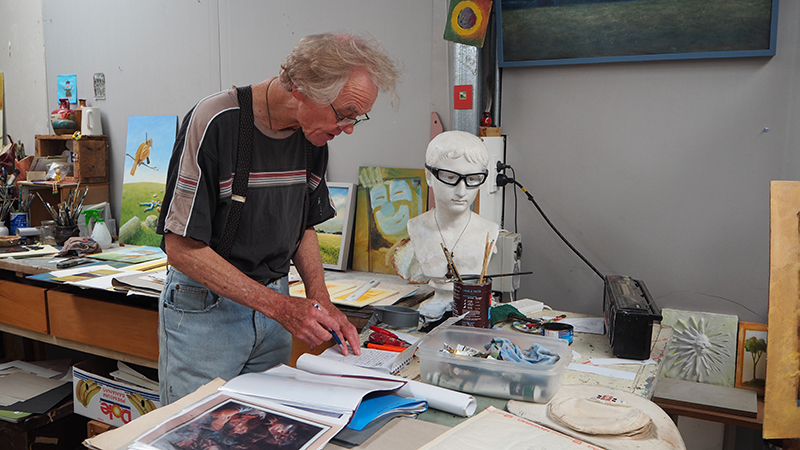 “I’m always doing various styles. I don’t know why,” Eric continues. “I could be painting that and this at the same time. It’s interesting to find out what I can do with things.”

Bosco the black labrador pads in and plonks himself down next to a stack of paintings. The slow pace of life up here suits him just fine. Outside, the cicadas have cranked it up a notch.

Although Eric’s worked in labs and on farms, it’s his connection to the community that’s been the strongest. He’s used his art to help disadvantaged youth as well as those living with Alzheimer’s and strokes. He spent sixteen years in the field of adult education, including four years teaching at Linton Prison.

“It’s where I first got paid to be an artist!”

You’ll have seen his stuff around Feilding and Palmerston North without even realising. He did the mural at the Feilding Railway Station, and the Old Boarding House on Manchester St, among others. The planter box mosaics along King St near UCOL are his too.

Eric became a full-time artist in 2008, living in Feilding. We think of Feilding as a quiet place, but it proved not quiet enough for him and in 2013 he made the move to Āpiti.

Since then he’s been doing more landscapes. The valleys and ridgelines of northern Manawatū and the Rangitīkei offer no shortage of subject material. Eric’s done plenty of travelling through these lands in search of that perfect vista.

Even if he finds it, there’s still more to explore.

“It’d be quite sad for me to be just a landscape painter or just a weird art painter. I think it would be missing the point,” he says.

“I know that’s frustrating for some. It’s frustrating for gallery owners, because they like you to have a style and a series, and I’ve just never really been like that. I just get busy painting. Put it together and away it goes!”

In the end, Eric says, if his painting can help in some small way, he’ll be happy.

“I just want to record, really. To tell the story. And to give people – hopefully! – insight.”

previous
With strange aeons
next
An unbreakable bond