Doors are usually the gateways to a journey. Open them, go through them, ta-dah. Everyone’s heard this story.

James Robinson looked at doors and decided to make the tale about them for once. So he sent them on journeys of their own.

Visit our Art Gallery and lean in close to his works on our wall. You can see their bones if you look hard. A sliding door from a 1960s bungalow here, little more than a frame covered in thin plywood. A thicker, older door from the mid-20th century there.

They’ve been transformed by where they’ve been, and it hasn’t been terribly nice. You can smell the scorching from where they’ve been set ablaze. Great chunks have been burned out of some. A waratah sprouts from another, suggesting an encounter of great violence. Bones and feathers are concreted into the surface by a layer of ash.

Some have aquired a canvas overlay in their travels. Huge rents are often slashed in its surface, to be sutured together again by old nails or seashells.

The seashells are ubiquitous, as is sand and other oceanic flotsam, for as the doors have passed through fire, so have they passed through the sea. Long have we imagined all the terrors that may lurk within those depths, unseen, but the blasted, salt-washed faces of these doors suggest they caught more than just a passing glimpse of such abyssal foes.

String connects many areas, like the web spun by a television conspiracy theorist. Is it an attempt at map-making, a vain effort to catalogue the procession of experience? By making these links, perhaps there is sense to be found amid the chaos. 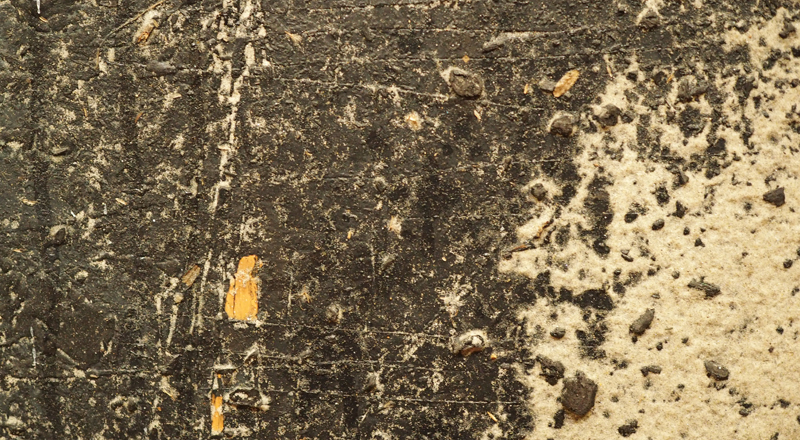 If this sounds a bit alarming, that’s the idea. The full title of Robinson’s exhibition is “Doors: hyper objects of the chthulucene”. The term “chthulucene”[sic] was coined by the American scholar Donna Haraway as she explored new taxonomies for the age we live in. It also inescapably recalls the Cthulhu mythos stories of horror writer H.P. Lovecraft, who imagined alien gods slumbering in ocean trenches or nearby dimensions, waiting to rise up, claim the Earth and drive its inhabitants to madness.

Robinson has grasped these ideas with both hands, creating works heavy with the imagined experience of treading in forbidden locales.

Accompanying them – sometimes a part of them – are Robinson’s works on paper. If his doors are explorers of hostile and otherworldly planes, these are the dreams they send back. They are visions of nightmare, messages from the liminal spaces bordering barely-comprehended realms. They make you glad it was the doors that took the trip and not you.

It’s an exhibition that will launch you well beyond your comfort zone. Each work can be confronting, disquieting, even threatening. They suggests places mankind was not meant to walk and, laden with the encrustations of their ordeal, repay repeated visits.

They, and the stories they have to tell, are with Te Manawa until 4 June.