THE DECLINE OF THE MECCANO EMPIRE

Te Manawa’s Mechanics Made Easy set was made in Meccano’s foundation years. This Airport Service set is far more complex and was sold in the mid 1960s, shortly after Meccano Ltd had collapsed and its shares acquired by rival company Lines Brothers, producers of Triang toys. It stands at a crossroads in which Lines sought to adapt Meccano to a changing market. Many adult enthusiasts rejected these changes and set up an alternative “Meccanoman’s” movement which looked back to an imagined golden age of Meccano modelling.

Meccano Ltd. had produced a wide range of products. Founding the company in 1906, Frank Hornby had in 1920 branched out into 0 gauge (1¼” track) model railways. In the absence of German competition, these were an instant success. In 1934 he introduced a range of model vehicles – “modelled miniatures” – branded Dinky Toys. There were other lines too, mostly aimed at boys and parents who believed that technological literacy was important for young men. These included chemistry and electrical sets, and car and aeroplane constructor outfits. When Frank Hornby died in 1936 he was a millionaire.

Frank’s son Roland succeeded him as Chairman of the Board of Directors. Initially the company maintained its dominance, but in the years following the war the directors failed to keep up with changes in the marketplace. By the late 1950s their key brands had new competitors, with Dinky Toys model vehicles under threat from Matchbox and Corgi, and Hornby Dublo electric trains undercut by Triang Railways.

When slot cars became the ‘must have’ toy Roland Hornby shrugged it off. “There’s nothing to it,” he said. “Just cars and racing.” (1) Meccano Ltd. introduced ‘Circuit 24’ in 1962 when the directors saw how much money Triang was making from ‘Scalextric’, but the product was a flop. Similarly, the company met the challenge of Lego with an inferior clone branded ‘Cliki,’ which the Brighton Toy Museum describes as “the most disastrous toy in the history of the British toy industry.” (2)

Other Meccano toys failed to hit the target. There were adjustable roller skates, self-hardening plasticine and the ‘Hornby Hoverer,’ a toy hovercraft powered by a glow plug motor. When Meccano Ltd. went into receivership in 1964, Britain was in the middle of a toy boom. But with the boom had come competition, and Meccano Ltd had failed to show the pioneering verve of its founder. (3) 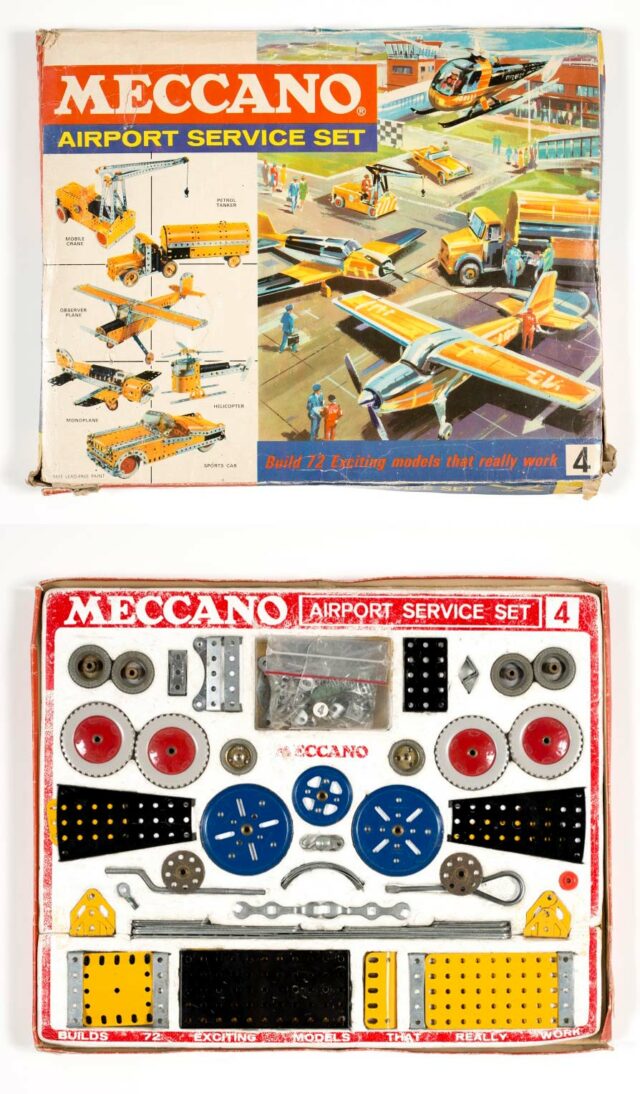 NEW-LOOK MECCANO FOR THE SWINGING SIXTIES

Te Manawa’s Meccano Airport Service Set dates from the beginning of the new order under Lines Bros. control. Although set numbers 00 – 10 contained the same parts as before and could still be upgraded with accessory outfits, the larger sets were themed: Site Engineering Set, Highway Vehicles Set and so on. The manual included with each set contained models appropriate to each theme. More importantly, the predominantly red and green colours of structural parts were changed to yellow and silver.

The object of this exercise is made clear in a promotional article in the Meccano Magazine of August 1964:

“‘Meccano gets with it’ is what they are saying in the shops of Great Britain – a phrase that heralds a dynamic change in the presentation of the world’s most famous construction system.” (4) This was, after all, the 1960s, and ‘getting with it’ was de rigeur. 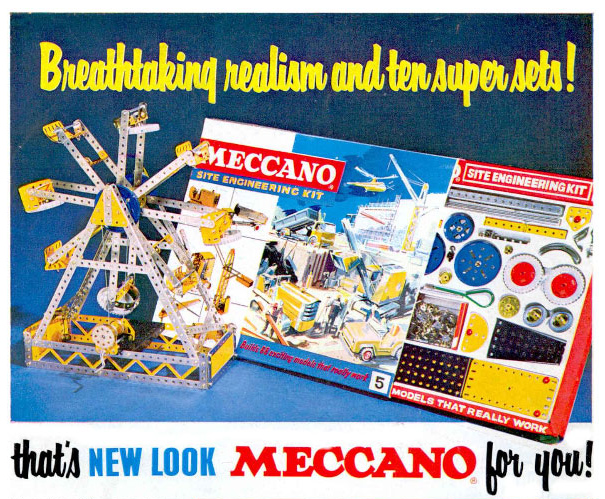 THE RISE OF THE MECCANOMAN

Not all Meccano enthusiasts appreciated the change, particularly adult modellers who also complained about the lack of Meccano model building content in the Meccano Magazine. Many believed Meccano had lost its way since the war and disliked the new colour scheme which they believed was only suitable for earthmoving machinery. Tom Ritchie’s PhD thesis Object Identity applies a semiotic model to the changing meanings ascribed to Meccano and sees a divergence taking place in the mid 1960s. (5)

The image Lines Bros. wanted to promote with their new-look themed sets and bright colours was of a progressive toy ready to compete with the many rivals for children’s attention – Lego, slot cars and above all, television. Meccano was essentially a toy, and had to appeal to toy buyers. Adult modellers, many of whom grew up in the 1930s, were unhappy. For them Meccano – to use Frank Hornby’s slogan – was ‘Engineering in Miniature.’ In 1965 a ‘Meccanoman’s Club’ was formed along with a journal aimed at advanced modellers. Members of the club with an engineering background began reproducing pre-war parts that had become obsolete, notably the iconic geared roller bearing used on the giant blocksetting crane which appeared on many manual covers.

These two strands of the hobby have continued to the present day. Clubs for adult modellers spread around the world in much the same way as boys’ clubs had done between the wars. Many, like New Zealand’s Federation of Meccano Modellers, publish their own magazines. These are primarily men’s clubs. Club websites and online videos of model building expos show men in their later years and complex, well finished models. In this, Meccanomen occupy a similar position to adult railway modellers or builders of detailed plastic aircraft and vehicle kit sets. Freed from the financial constraints of childhood they are able to pursue their hobbies at the highest level and buy whatever parts they need.

Fifty years on from the changes to Meccano’s image initiated by Lines Bros, current Meccanomen are no longer bound by notions of loyalty to ‘original’ Liverpool made Meccano. Many small companies and workshops around the world now supply not only parts based on obsolete Meccano items but a range of new, Meccano compatible components aimed at the adult hobbyist. These include a wider range of gears, large motor tyres, and specialised structural parts which are made in India, Argentina, Australia and the UK. 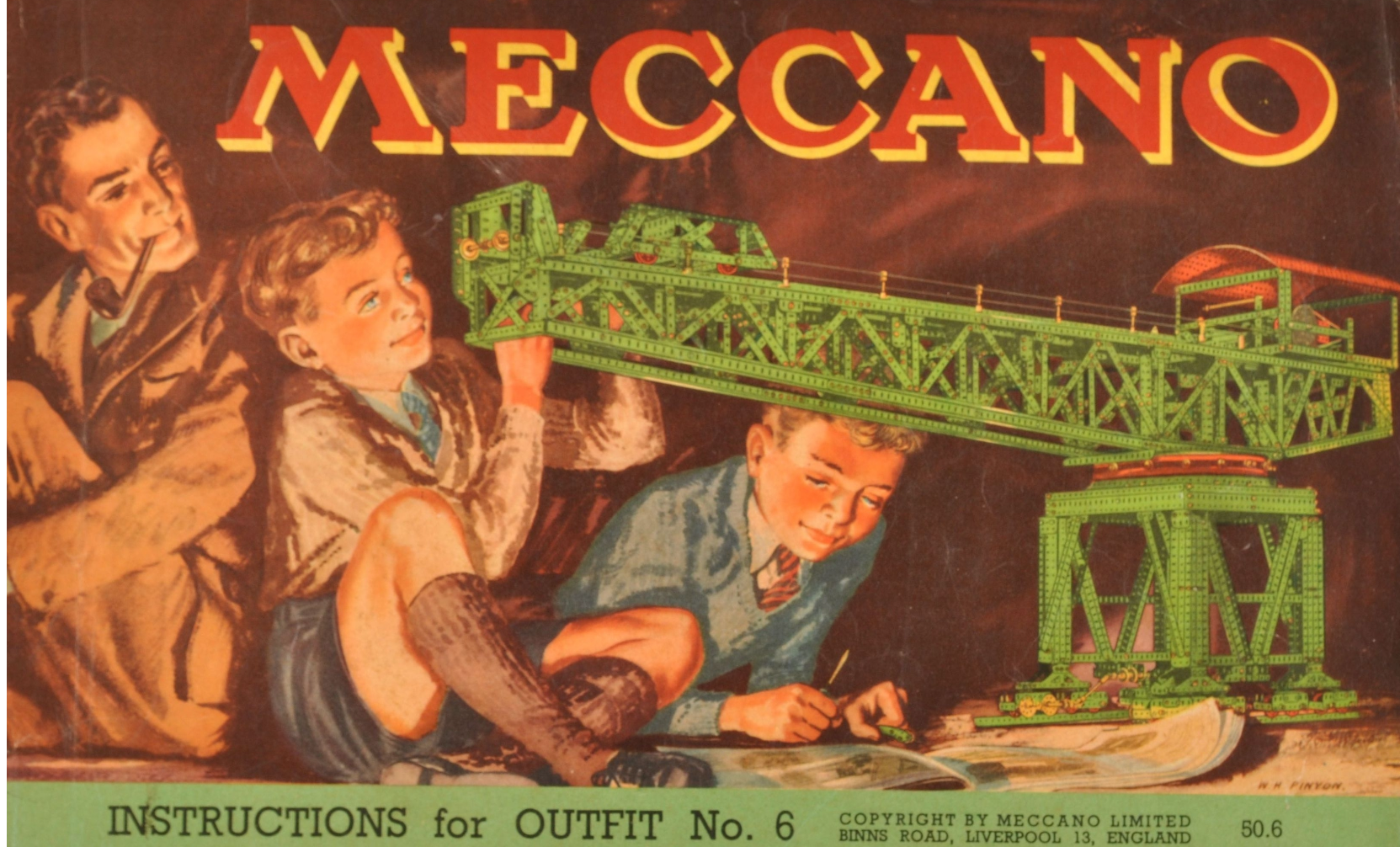 Cover of a 1950 Outfit 6 manual showing a blocksetting crane, its boom  mounted on a geared roller bearing. The ‘GRB’ was not produced after the war and was seen by some Meccanomen as a symbol of a lost golden age

MECCANO FOR A NEW AGE

Back in the commercial world, Meccano continued to falter throughout the following decades. In 1971 Lines Bros. collapsed and was taken over by Airfix, best known for its plastic model kits. When Airfix failed ten years later the Meccano brand passed through a number of hands and is currently owned by the Canadian toy giant Spin Master. Meccano has followed a hundred year trajectory similar to that of other iconic British brands, particularly in the car industry. The Rolls Royce marque is now owned by BMW, Jaguar by Tata of India, and MG by the Chinese state owned enterprise Nanjing Automotive. Over the last thirty years globally based companies have tended to expand at the expense of established national brands.

Under Spin Master, Meccano products have been driven by global trends. Gone is the system of progressive sets which can be enlarged by accessory outfits, rather, the emphasis is on smaller sets, some intended to build one specific model, e.g a Ducati motorcycle or Ferrari racing car. Many of the parts in these sets are specific to a particular model rather than having multiple applications.

It is tempting to speculate as to why one-off models are a better sales prospect than a toy which can be dismantled after assembly and built into something else. Is it a symptom of children being time poor like the rest of us, or impatience with hobbies that demand taking a longer view?

In one way, today’s Meccano is promoted in a similar way to its ancestor, Frank Hornby’s Mechanics Made Easy. Hornby marketed the system as an educational toy in which building the model was more important than the completed toy or model itself. The packaging of the Meccano Ferrari above reveals a similar message. The Meccano logo is subtitled ‘Maker System’, aligning Meccano with the wider Maker movement, which emphasises learning through doing. Below this is the acronym STEM (science, technology, engineering, mathematics) within a small circle. Many educationalists see STEM subjects as critical to child development as well as ensuring the future technological literacy of the workforce. Frank Hornby would have understood these aspirations. In 1917 he published a reader’s essay in Meccano Magazine that imagined Meccano as an instrument of future British greatness: “In the future the nation will produce a class of engineers that has never been excelled before, due to the popularity of Meccano amongst the boys of this country.” (6)

Hornby’s was a male-centred vision. The image of the ‘Meccano Boy’ remained unchanged for most of the twentieth century, even after Lines Brothers, and later Airfix, acquired the brand. However, a core objective of the STEM educational policies of many countries is to narrow the gender gap in STEM professions. This is surely why an increasing number of Meccano model kits feature girls, particularly the ‘Meccanoid’ robotic sets that teach programming as well as constructional skills.

When Te Manawa’s Airport Service Set was made in the mid- to late-1960s, it was common for adult Meccano modellers to talk in terms of Frank Hornby’s vision being under threat. The truth is that Hornby was first and foremost a marketeer with a nose for the aspirational culture of his day. Had he been a 21st century entrepreneur aware of the marketing possibilities of STEM educational toys he too would have presented his new  four foot tall personal robot hand in hand with two girls, knowing that it would be good for business. 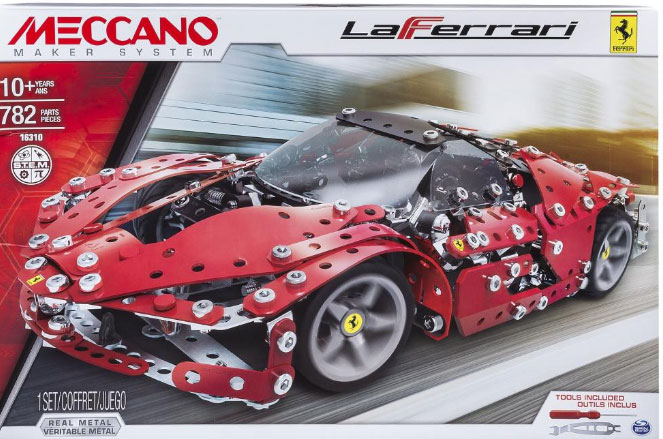 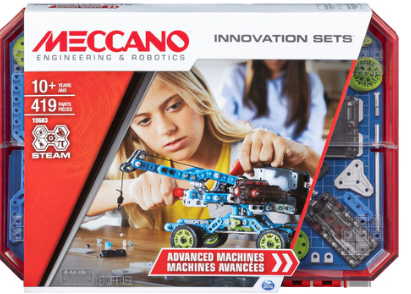 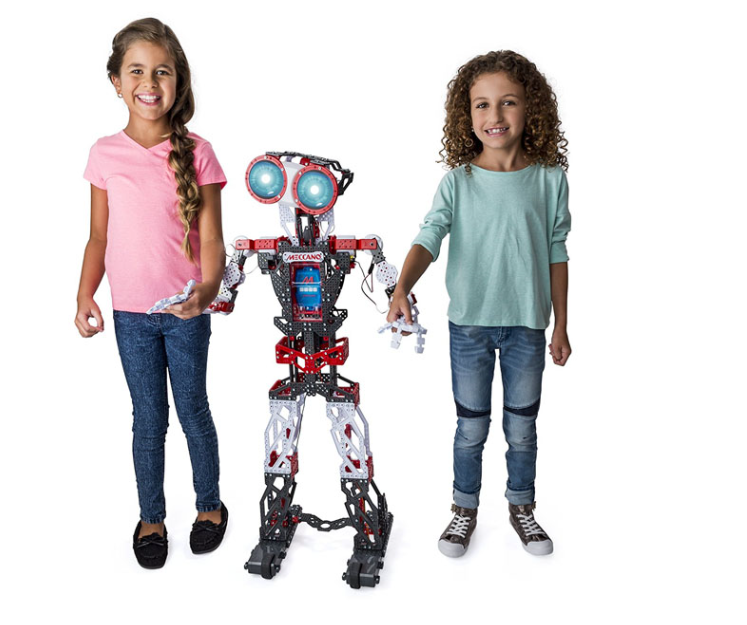 A MECCANO BOY IN PALMY

The Airport Service set’s donor believes that his set was bought at Collinson and Cunninghame. I was a ‘Meccano Boy’ in the 1960s and my Christmas accessory outfits certainly came from C&Cs. Although the store sold Meccano spare parts so did Pink and Collison motorcycle dealers in Cuba Street. This may seem a little odd, but could have been because the owners held an import licence which was too useful to give up. Most imported goods, from handkerchiefs to bicycles required an approved licence in the 60s and 70s and these were a valuable asset for any company to hold. Another possible explanation is that Pink and Collison saw the Meccano hobby as a valuable skill base for ownership of the British motorcycles that formed the bulk of their stock. Both Meccano model building and maintaining an English motorcycle demanded strong improvisational skills. English motorcycle companies could rarely afford to design a new model from scratch and often developed them from a pre-existing ‘parts bin.’ The bikes were notoriously unreliable compared with the Japanese marques that succeeded them, requiring constant attention from their owners. Some British bike enthusiasts took a Meccano Boy’s attitude to their passion by building a ‘special’ from the parts of two different brands. Thus, a Triumph motor in a Norton frame became a ‘Triton’ and so on.

Import licencing meant that the Meccano part you wanted was rarely available when you wanted it. Pink and Collison’s Meccano spares were housed in a tiny annex to one side of the counter. It was the size of a large walk in wardrobe and lined with narrow shelves on which items were arranged according to their parts number. Manager Bob Pink would allow me into this room to browse whenever the parts I needed were out of stock. If you wanted a pair of gears to give a 4:1 ratio you might have to buy two pairs of 2:1 or buy two 12 ½” angle girders to make up a single two foot girder. Perhaps Bob hoped that I might go on to buy a BSA or Ariel.

Read part one of this series. 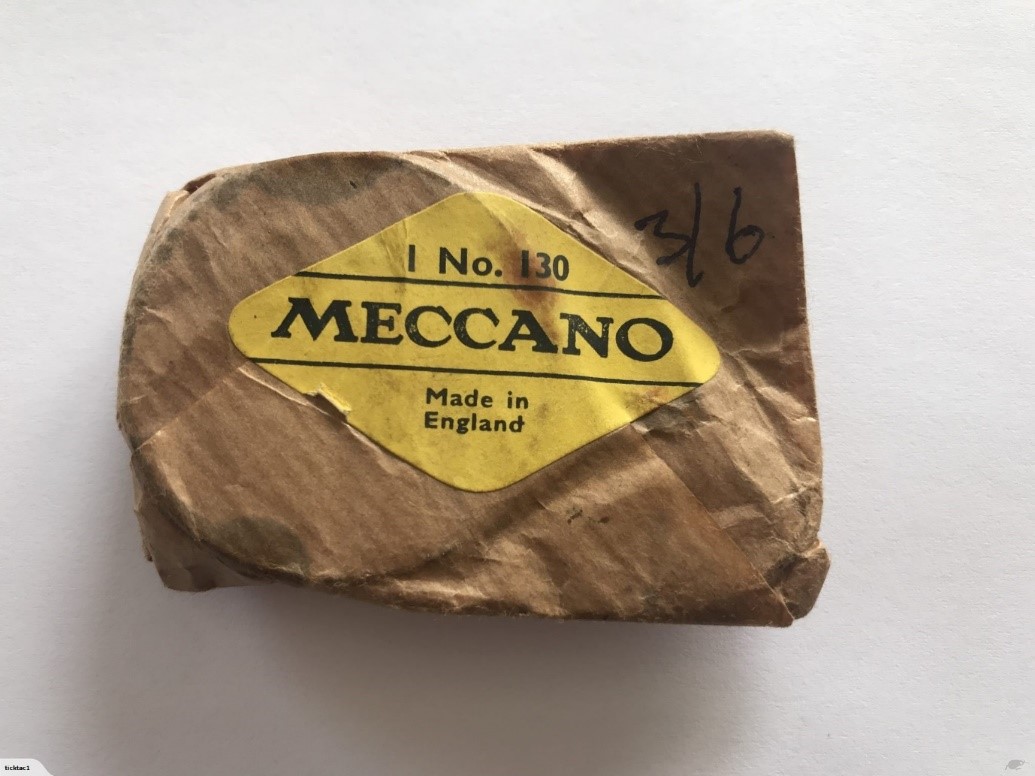 An unused Meccano triple eccentric recently sold on eBay. Pink and Collison’s Meccano parts shelves were stacked with packets like this.

previous
Mechanics Made Easy
next
Tribute to suffrage pioneers