The Art of Flying

Museums are an endless source of interest and fascination, as a single collection item can spin the viewer off on numerous historical tangents.

Take this painting, for example; normally housed in the depths of the collection store but recently brought into the light: 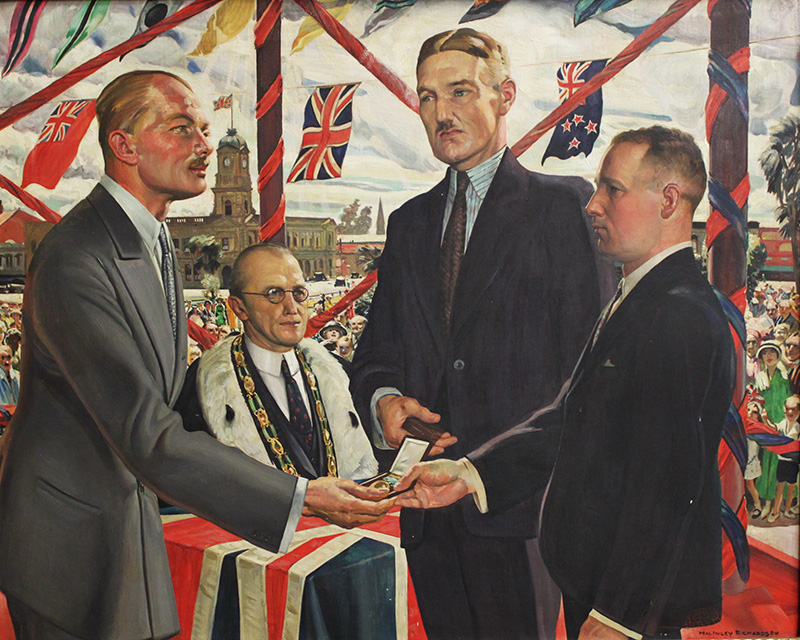 It depicts Henry, Duke of Gloucester, presenting medals to Squadron Leader M.C. McGregor and Mr H.C. Walker, in Palmerston North’s Square. The mayor of Palmerston North, Augustus Mansford, looks on and an excited crowd thrills to the sight of an actual royal, the third son of King George V.

The image shows a local scene and local people, yet has its roots in huge international events. McGregor and Walker were receiving medals for their strong showing in the MacRobertson Air Race, a 1934 aerial sprint from England to Australia that captured the world’s imagination. We have to go even further back, however, to get the full story: to the farmlands of the Rangitīkei and, later, the skies over Palmerston North.

Malcolm McGregor was born near Hunterville in 1896 to a family of farmers and sawmillers. Not yet 18 when the Great War broke out, he was keen to ‘do his bit’ and began pilot training in 1915. By mid-1917 he was battling German aviators over the front lines in France and Belgium. In 1918, at the age of just 22, he shot down his fifth German plane and became an ace. At the war’s end his score stood at nine aircraft destroyed. He’d won the Distinguished Flying Cross (for which he would later be awarded a Bar), and had twice survived being shot down – the second time in No Man’s Land, from which he made a dramatic escape under heavy German fire.

Upon his return to New Zealand, McGregor farmed in Waikato before resuming his flying life in 1921. He flew for various air services, including a private service for Cadbury executives and as a relief pilot following the Napier earthquake. Just two years after being seriously injured in a crash at a Palmerston North Air Show, he was the Manawatū Aero Club’s choice to fly in the MacRobertson Air Race.

Henry Walker flew his first aeroplane from Palmerston North Aerodrome, the first pilot to be trained by the Manawatu Aero Club. He was 26 when he joined McGregor for the air race.

Australian confectioner and philanthropist Sir Macpherson Robertson, together with the Mayor of Melbourne, proposed an air race from England to Melbourne to promote aviation in the public mind. Robertson put up £15,000 in prize money.

With just two hours left before entries closed, the Manawatū Aero Club threw its hat into the ring, with McGregor and Walker as pilots. A Miles M.2F Hawk Major was commissioned and, true to the last-minute nature of the entry, was completed just three days before race scrutineering. The pilots dubbed it “Manawatū”.

In front of 60,000 people, McGregor and Walker took off from Mildenhall aerodrome in Suffolk, England. Weight limits meant they could wear only light clothing in their open-topped Hawk Major – and McGregor knew from his experience in WW1 that pilots sometime had to be carried from their planes, so frozen were they from high-altitude flying.

They made it to Melbourne in a little over seven and a half days after a relatively drama-free journey. In a field of twenty racers, they were the fifth to finish, and the first to do so in a single-engined plane.

(The winners flew a DeHavilland DH88 Comet, a plane designed and built specifically for this race. This speedster, appropriately painted red, made the trip in a little more than half the time of the New Zealanders.)

Newsreel footage of race preparations and its conclusion is available on Youtube; although McGregor and Walker’s plane does not appear in it, the film gives a good impression of the size and spectacle of the race. 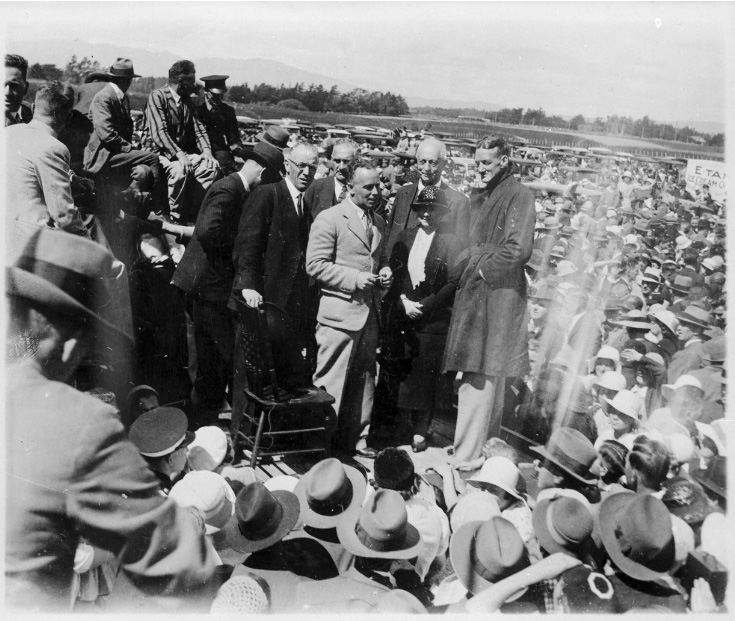 Malcolm McGregor (at right) and Henry Walker (in light suit) receive a heroes’ welcome upon returning to Palmerston North after the air race. Image: Palmerston North Libraries and Community Services

The story of the painting itself is also a neat little chapter in local history.

It was painted in 1935 by H. Linley Richardson, not long after the Duke of Gloucester’s visit to Palmerston North in January, and most likely from reference photos. The city turned out in force to welcome the Duke.

Richardson was born in England, but emigrated to New Zealand in 1908 to become an art instructor at Wellington Technical College. He sketched Sir Ernest Rutherford and his portraits of prominent Māori drew praise from Sir Apirana Ngata. In 1928 he moved to Palmerston North and taught art at PNBHS until his retirement in 1946. He died in 1947.

The Palmerston North City Council bought the painting following a 1944 exhibition at Rosco Department Store. It was intended to hang in the new municipal buildings but was kept at the City Library until 1966, when it entered the collection at the Manawatū Art Gallery.

Here, visiting Massey University museum studies student Freya Elmer undertakes a condition report of the painting, assisted by collections manager Toni Edmeades. Condition reporting involves a detailed check of all an object’s surfaces, noting the location of damage and any other deviations from its nominal state.

Malcolm McGregor continued flying upon his return to New Zealand. In February 1936, on approach to Rongotai Airport in Wellington, his plane struck an instrumentation mast and crashed. McGregor died later of his injuries. He is buried in Kelvin Grove Cemetery.

Henry Walker went on to be among the founding staff of Union Airways in 1935, command transport squadrons in the Pacific during WW2, and become the chief pilot of the National Airways Corporation. He was a central figure in the development of post-war commercial aviation in New Zealand. Walker died in 1991 at the age of 83.