This particular set of robes: how old is it?

Well the first set that we were looking at was purchased in 1935. It was made – made or acquired – by DIC in Dunedin. They seemed to be a major supplier of robes at the time. The lighter robe was certainly well on into the 20th century.

How much did such finery cost the city in those days?

This is the second, heavier one, from 1953. It was also from Dunedin DIC, and that was seventy-one pounds. It was really important, I suspect, to various councils, that they followed the sort of tradition, the very rich tradition from medieval times, about the town leaders having something that gave them authority and rank. It was also a bit of a challenge, I think, to some of the feudal landowners roundabout, and perhaps also at times to the king, because you were the mayor of a medieval city, and you had no desire to have much interference from the landed estates around you, the barons and so on, or from the crown. So as always that sort of a uniform carries something about the importance of the position.

I imagine in New Zealand that you didn’t actually buy robes until you could afford them.

On what kind of occasion was the robe worn?

There’s a bit of a protocol that robe and chain are worn when it is a case of mayoral duty. The mayoral robes, for example, should be worn at public functions when the mayor is invited as “the mayor”, not if the mayor goes along as a private citizen. In any Council activity when the mayor is conducting the meeting, that is when the chain should always be worn; the robe is a matter of choice, really, for things like meetings. I have to emphasise, in terms of the mayor wearing the chain and chairing the meeting: that’s the Council meeting. If the mayor is chairing a committee meeting, that doesn’t have the same weight and it would not be appropriate under those circumstances for the chain to be worn; it’s just the mayor as “the mayor” chairing something.

Or very special occasions. The time I remember being too hot wearing all the mayoral robes and chain was Prince Andrew’s visit, and accompanying him on his walkabout in the Square. He was in his military dress, because he had an important role in relation to the people out at Linton, and I suspect he found it as hot as I did that day; it was a lovely, lovely Palmerston North day. 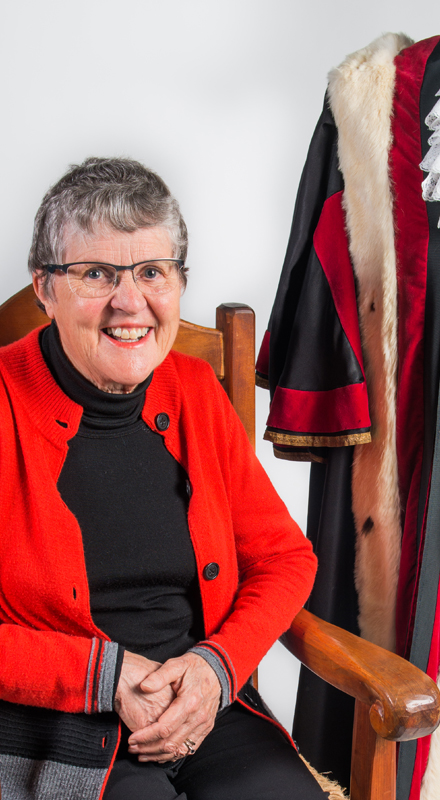 Now you mentioned that the two different sets of robes are made of different materials. Is one a lot lighter, was there a summer and winter set?

I think that the lighter one came along in 1960, and it only cost sixty-five pounds, and I imagine that the mayor of the time thought of  his 1953 robes: “this IS too heavy, I really need a summer one”. So the lightweight one arrived somewhere between February and April in 1960.

Are they replaced often?

Well, 1935 to 1950, and I think there were enquiries a bit later on. There may well have been a change since 2001, when I finished. I’m guessing that there could have been, given that the original, and presumably the 1960 one, are being given wonderfully to Te Manawa.

It would have to be “one size fits all” then.

Absolutely, yes. Fortunately those sort of robes do. It’s really a matter of whether it’s almost down to your ankles or whether it’s down to just below your knee.

So shorter mayors have to watch their step.

Indeed. There is quite a lot of it when you are carrying it around.

Yes, they do sit alright. Interestingly I’ve never asked Paul Rieger why he never wore the robe at council meetings. The most awkward thing about the council meetings that I remember is not the robe, but the chain. Because it was heavy, the pendant on the chain was quite big, and clunky, and you’d lean forward and it would go “bang” against the edge of your desk. It really was, I thought, a bit awkward, and with the big pendant, I don’t know that you’d actually call it pretentious, but it was not elegant, and I suspect there are many more elegant mayoral chains than that one.

So if the mayor wears these robes to display their significance and importance, how come it just seems to be a mayor thing? The Prime Minister doesn’t wear a robe; how is it that this tradition has survived?

That’s a good question. It has survived in other areas as well, like the judiciary, and academia. I’m not sure that mayors nowadays see it as a challenge to the authority of the state. You see it very much within that home patch, you don’t wear the robes and chain outside your own patch. You wouldn’t go into someone else’s district or city and wear it, it’d be a bit of a challenge, that.

Are they always made in New Zealand?

DIC in Dunedin may have made them but imported some of the material like the fur lining and so on. That’s a good question.

There’s a hat that goes with the robes, isn’t there?

It looks like something from “The Pirates of Penzance”! I think it is very much a male thing; I don’t know how often the male mayors of Palmerston North wore it, but I certainly wouldn’t dream of wearing it, because I’d just look ridiculous. I think that is a bit of tradition that people have decided “oh we’ll just push that away into the corner”.

What about at formal ceremonies like graduations, where you have to wear a hat, what do you do there?

You’ve got to find a black hat to wear, and if you’re wiser than I, you’d make it one that was appropriate and easy to lift, to acknowledge the Chancellor at the appropriate times.

And what happens if you are not…?

Well if you’re not, you buy the only black hat you can find in town at the time, and I’d have to say it was done in rather a hurry, and if it turns out that it would be something more suitable in “Doctor Zhivago” than an academic ceremony, then so be it! It’s one of the things you just have a quiet laugh about afterwards.

One thing I did notice in going through the archives was, there was quite a lot of correspondence between the town clerks of different cities throughout the country about the prescriptions for the gowns, and where you got things and what you did for the chains, and so on. One of the interesting things was when Mark Bell-Booth became mayor, over his robe he wore a Māori cloak, at his inaugural ceremony, and that was because he had a relationship with Rangitāne. So that to me is really interesting, in the sense of bringing something which is Māori – New Zealand ceremony – into something that has been inherited from Britain, really. It would be really interesting to know in other cities and districts whether they also bring in aspects of Māori culture. I thought that was really important, in the sense of, you know, making something New Zealand as well as the tradition from the British heritage.

previous
A blanket solution
next
Arts access for all

ADMISSION:
*General admission to Te Manawa is free although donations are greatly appreciated. Charges may apply to some exhibitions/programmes.

Click below to sign up for regular updates from Te Manawa including news, information and previews of upcoming exhibitions!

Te Manawa is open under Covid-19 Alert Level One.