The speeches are over, and the student body has diffused out into Te Manawa’s corners, to different pockets of zine-making creativity, hands poised, tools at the ready, minds afire with the wisdom they’ve just received. After all that listening, it’s a relief to talk again, to get those thoughts out, to narrate the process of manufacture.

“Where’s that light purple colour?” asks one student. “Actually no, give me that one.” Reaching for the maroon, improvising in the space between hand and page.

“I should probably have drawn this beforehand. I’ll just do it the hard way,” says another, yet her scissors intuitively outline a cartoon flower shape.

“This didn’t work at all…oh wait, it did!” A revelation in coloured card.

The ideas flow fast and freely. Here the pages fill with fat black text, there they are covered in fine-point illustration. One student deconstructs the page entirely, piercing it and using the torn edges of the hole itself.

Local designer Jemma Cheer abandons her black and white scheme halfway through and begins again in colour. She’s “in charge” of the workshop but realised right away that it was best to let everyone do their thing.

“I yarned for a while about who I am, but that stuff doesn’t take long. So now we’re ‘pow, let’s make some future’.”

And that’s what everyone’s doing. 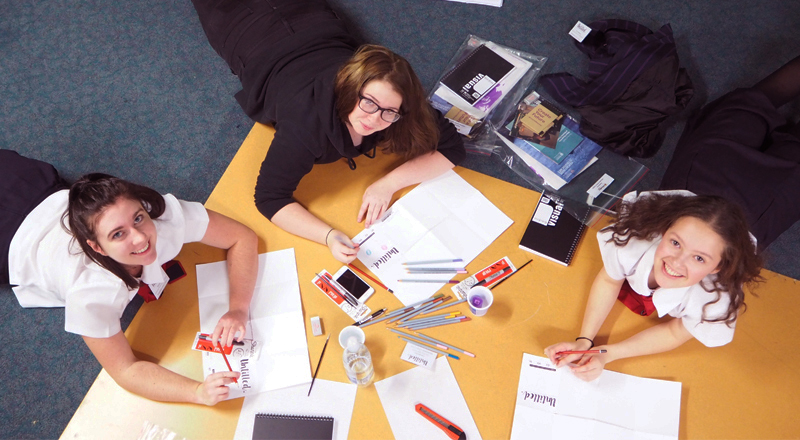 This is why we’re here. The 70-odd secondary students have gathered from around the region for the Untitled: Creative Futures conference, first of its kind. “Putting creative pathways in front of our students,” the website says.

A “pathway” might not be the best way describe keynote speaker Stacey Cottrill’s philosophy. A cloud, perhaps? The founder of Black Sheep Design, she emphasises the importance of a safe and comfortable environment as a base for striking out in whatever direction you choose.

“Don’t worry if people say you don’t have a plan. Keep going. If you’re scared, turn off that voice – it’s just you telling yourself it can’t be done.”

Fail fast and move on, leave ego behind, say yes and above all don’t be afraid to try crazy things!

UCOL photography lecturer Ian Rotherham recommends a visual diary to build “visual knowledge” and help corral all the ideas and free thinking, advising that unstructured creativity can achieve other ends.

“Shoot. Then shoot. When in doubt, keep shooting. Have a bit of a play. You’ll solve problems before you even know they’re there.”

Even strictures can inspire, he says, noting his introduction of a ban on cats as course subjects. Almost inevitably the students countered with a guerilla campaign, the walls of UCOL’s Block 2 becoming a rebellious gallery of cats.

“Just go out and do fifty paintings. Don’t worry about what that first one’s gonna look like,” says artist Andrew Moon. He exhorts the students to free themselves of what they think they ought to like and pick their own path.

“I don’t like Colin McCahon. I’ll probably get struck by lightning for saying that.” There is a pause, filled with a few giggles. He remains mercifully unzapped.

“Learn what you like and run with it. You don’t have to be different to be good.”

Another piece of advice about art theory comes from Māori visual artist Israel Birch: “Be cheeky but respectful.”

His easygoing style and dry humour quickly wins over his audience. He has a knack for discovering the tender spot in his pupils’ tough exteriors and piercing them with a love of the arts. He had his Hastings class make skateboards – something to which all his students could relate – and through this had them learn about their culture and who they were as Māori. The exhibition was simply the students using their finished skateboards.

“For me, art is like medicine. It’s a place to heal, to talk about what you believe in.” His listeners are impressed by the way art blended with education, while at the same time shattering preconceptions of what art is and how it should be exhibited.

Then it’s lunchtime, and there’s a lot to think about. 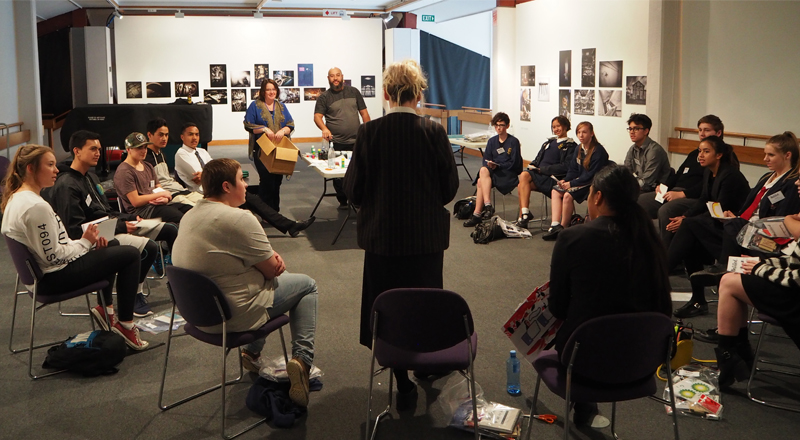 Upstairs in Gallery 5, popular culture is under sharp-edged assault, the everyday icons of Apple, Facebook, Nike and others sliced into bold new narratives. A stroke of the knife or the pen and the symbols of corporate overlords are hijacked, reassembled, subverted.

The conversation is avant-garde.

“So now you’re just going to fill it with question marks?”

“Well what if I want it to be upside down?”

“This is beyond weird.”

Israel Birch calls time. If he hadn’t they’d still have been there, reconfiguring the world, when the lights went out.

It’s been a day filled with learning about artistic practice and the process of making, but between the lines there’ve been plenty of Big Picture lessons, designs for living on which the students have zeroed in. Having a single job isn’t the end of ambition, for one. For another: careers can come out of nowhere, so why waste energy worrying? Perhaps the most practical lesson came from a girl of about 14, reporting what the day has taught her.

“Art doesn’t have to make sense,” she says, the glow of epiphany clearly audible.

Think about that the next time you take a stroll through a gallery. Artists are making some future, whether it makes sense or not. Art first, sense later. That’s sort of the idea, isn’t it?

Banner image by Lisa Purda. Additional photographs of the day, the students and their art can be found here and here